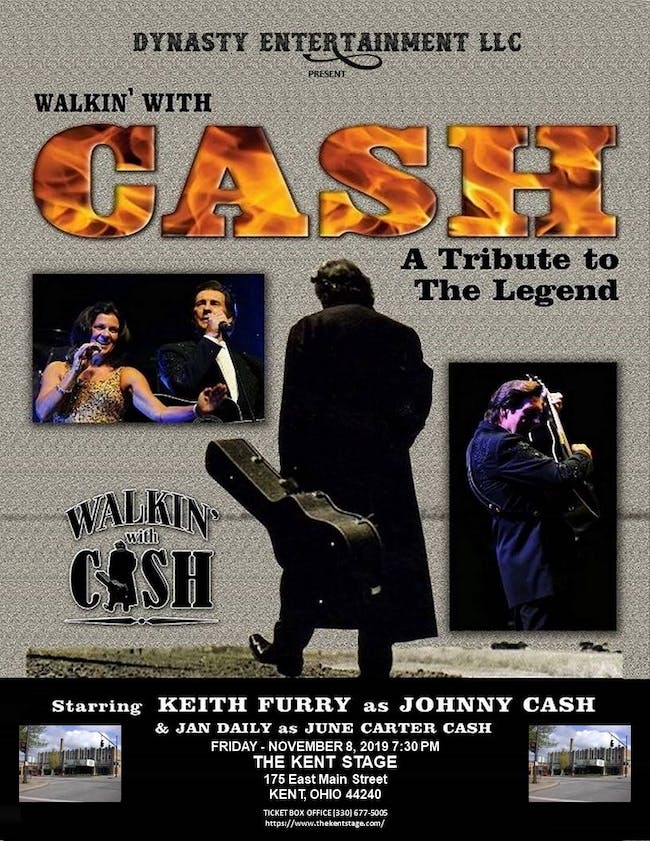 A Tribute to the Legend Johnny Cash

Come celebrate an evening with Keith Furry a well-known national Johnny Cash Tribute Artist in his first ever appearance to the Kent Stage. The show is a celebration of the life and music of an American icon and an unforgettable tribute to ‘The Man in Black’. Keith's love for this legendary entertainer is obvious throughout his show. Keith is also a legend from southern Illinois.

Keith and his “Walkin’ with Cash” band have sold out shows all across the country from Las Vegas to Nashville. Keith will rock the Kent Stage and have the crowd rockin in the aisles! You can tell a man and his music are loved when the crowd demands encores and Keith kindly gives the crowd what they want! A show you will be asking when he will return!

When Keith steps up to the microphone and reveals his deep, booming voice, you will swear Cash has returned. Furry captures those intricacies with a fan's eagerness and a musician's skill. From his note perfect trembling baritone voice to his all black outfits, every detail rings true during Keith’s shows.

Keith Furry brings a very stunning representation of the legendary music of Johnny Cash through the audience, captivating viewers and listeners with ease.

Cash will live on forever in our hearts and our minds and on Friday November 8th at the Kent Stage in lovely Kent, Ohio as they pay tribute to the Man in Black with a special show featuring one of the top performers from Las Vegas, Keith Furry and his “Walkin with Cash” show.

Cash was a larger than life figure with larger than life faults who loved Jesus and drugs at the same time. He remains one of the only artists to sell over 90 million records. As an inductee of both the Country Music Hall of Fame and the Rock 'n Roll Hall of Fame, Cash helped bridge the generation gap and break down musical barriers.

Walkin' With Cash is a celebration of the life and music of an American icon and an unforgettable tribute to The Man In Black. Keith's love for this legendary entertainer is obvious throughout his show. Cash left some mighty big shoes to fill but when Keith steps up to the microphone and reveals his deep, booming voice, you will swear Cash is back.

Keith Furry is well aware of the complexities surrounding Johnny Cash, in fact, he embraces them. "One of my favorite lines to describe Johnny Cash is from the book 'Cash' by Rolling Stone magazine: 'Sinner, Saint, Rebel, Voice of Protest, Man of Faith', says Furry, leader of the tribute band Walkin' With Cash.

Hailed as one of the most influential musicians of the 20th century, Cash had that rarest of crossover appeals, having earned induction into the Rock n Roll, Country and Gospel Halls of Fame. Furry captures those intricacies with a fan's eagerness and a musician's skill. From his note perfect trembling baritone voice to his all black outfits, every detail rings true during a Walkin' With Cash show.

Of course, much of Cash's music, particularly toward the end of his stellar career, focused on moral questions and the search for redemption but Furry's rendition of this often dark and mysterious superstar never translates into a dour, over-serious experience on stage. Instead, Furry delves deep into the Cash catalog shining a spotlight on every corner of this legend-from his rockabilly beginnings to his flirty duets with wife June Carter Cash, expertly recreated in the Walkin' With Cash performances by Jan Daily.

It would be hard to portray Johnny Cash and not be somewhat playful and heartwarming, "He had a wicked sense of humor" Furry says, "I'm there to have a good time and it shows". For the enthusiastic, late-blooming Furry, there's no other way to perform

Furry originally unveiled his imitation of Johnny Cash on a lark and a new passion was born. He was a percussionist and backup vocalist for a local Elvis tribute band, The Blue Suede Crew. "The lead singer needed a break to change costumes during the show and asked if I knew anyone that could sing like Johnny Cash. I surprised him by belting out "Folsom Prison Blues" and that's how I started my tribute to The Man in Black", Furry remembers.

Along with Scott Wattles, as Elvis, The Blue Suede Crew became an almost instant regional draw and even recorded at the legendary Sun Studios in Memphis, TN, birthplace of the mythical careers of both Cash and Presley.

Perhaps, inevitably, Furry's star continued to rise and he subsequently established a stand-alone project devoted to The Man in Black called Walkin' With Cash. The group promptly established its own network of fans across the area.

"I try to keep it as true to the original as possible," Furry says, "Cash's musical career was over a 50 year span and we cover as much as possible from the memorable 1954 hit single "Hey Porter" to "Rusty Cage" (from the Grammy winning 1996 project "Unchained") and all the heavy hitters in between."

Douglas James Kershaw (born January 24, 1936[1][2]) is an American fiddle player, singer and songwriter from Louisiana. Active since 1948, he began his career as part of the duo Rusty and Doug, along with his brother, Rusty Kershaw. He had an extensive solo career that included fifteen albums and singles that charted on the Hot Country Songs charts. He is also a member of the Louisiana Music Hall of Fame, being inducted in 2009.

Born in an unincorporated community called Tiel Ridge in Cameron Parish, Kershaw did not learn English until the age of eight. By that time, he had mastered the fiddle, which he played from the age of five, and was on his way to teaching himself to play 28 instruments.[3] His first gig was at a local bar, the Bucket of Blood, where he was accompanied by his mother on guitar.[4]

Kershaw became interested in Cajun music during parties his parents would host on the family's houseboat in Louisiana, where he first heard Cajun bands playing the music.

Doug grew up surrounded by Cajun fiddle and accordion music. After teaching his brother, Rusty, to play guitar, he formed a band, the Continental Playboys, with Rusty and older brother Nelson "Peewee" Kershaw in 1948.[4] With the departure of Peewee from the group, in the early 1950s, Rusty & Doug continued to perform as a duo. In 1955, when Kershaw was nineteen, he and Rusty performed on the Louisiana Hayride KWKH radio broadcast in Shreveport, Louisiana.[5] The two also performed at the WWVA Jamboree (later renamed Jamboree U.S.A.), in Wheeling, West Virginia.[6]

Although the brothers initially sang in French, J. D. "Jay" Miller, owner of the Feature Records label, persuaded them to incorporate songs in English into their repertoire. In 1955, Doug and Rusty recorded their first single, "So Lovely, Baby." Released on the Hickory label, the tune went to number 14 on the country music charts. Later that same year, Doug and Rusty were invited to become cast members of the Louisiana Hayride cast. The Kershaws appeared at the Grand Ole Opry in Nashville, Tennessee and became regular members of the Opry cast the following year.[3][7]

Despite the demands of his music career, Doug enrolled in McNeese State University, in Lake Charles, Louisiana, where he earned an undergraduate degree in Mathematics. At the peak of their early career, in 1958, Doug and Rusty both enlisted in the United States Army. They devoted their attention to the military until their discharge three years later.[4]

After fulfilling their military obligation, the two brothers recorded "Louisiana Man", an autobiographical song that Doug had written while in the Army. The song not only sold millions of copies but over the years has come to be considered a standard of modern Cajun music.[8] The song was eventually covered by more than 800 artists.

There were three albums released by the duo on Hickory Records, only one being released before they split up. The first was Rusty and Doug Sing Louisiana Man (LPM 103) in 1961. Kershaw (Genus Cambarus) (LPS 163) was released in 1972 and was a double LP. Louisiana Man (HR 4506) was the final Hickory album, released in 1974. By 1964, the brothers had elected to go their separate ways. It took another three years before Kershaw signed a songwriters' contract with BMI, in 1967/

In June 1969, Kershaw made his first network television appearance on the debut of the Johnny Cash Show.[4] He capped the year with a week-long engagement at the New York City's Fillmore East as opening act for Eric Clapton's Derek and the Dominos. While it seemed to many rock and pop fans that Kershaw had appeared out of nowhere, he had already sold more than 18 million copies of the records he had made in the early '60s with his brother, Rusty. "Louisiana Man" had been a Top 10 country hit in 1961 and its follow-up, "Diggy Liggy Lo", had done almost as well. His performance in front of a national audience led to Warner Bros. Records signing him to a long-term contract.[9] In July 1969, he performed at the Newport folk festival along with Joni Mitchell, Arlo Guthrie, Ramblin Jack Elliott, Big Mama Thornton, and Mimi Fariña, among others. Newcomers that year were Don McLean, James Taylor, and Jerry Jeff Walker. In November 1969, "Louisiana Man" was broadcast back to earth by the crew of the Apollo 12 moon mission.[10] Beyond the southern venues, Kershaw became widely known in mainstream America as he played at major urban concert halls.

In 1971, Kershaw had a musical cameo in the Western film Zachariah, starring Don Johnson and John Rubinstein.[12] Kershaw roller-skated and played fiddle at same time in iconic rink scene from Heaven's Gate (1980 Western movie). (See You-Tube clip of this.)

In 1972, Kershaw played electric fiddle in Grand Funk's "Flight of the Phoenix" off their LP Phoenix. Capitol SMAS 11099[13]

Despite the success of his solo career, Kershaw was plagued by depression and sorrow. His father had committed suicide when he was only seven.[14] Marrying his wife, Pam, at the Houston Astrodome on June 21, 1975, Kershaw began raising his own family that included five sons – Douglas, Victor, Zachary, Tyler, and Elijah; and two grandsons and a granddaughter. His son, Tyler, plays drums in his band as well as manages his shows.[15]

Kershaw rebounded with his biggest selling hit, "Hello Woman", which reached the country music Top 40. By 1984, Kershaw's battle with drug and alcohol abuse came to a close and his previously erratic behavior changed for the better.[3]

In 1988, he recorded a duet, "Cajun Baby", with Hank Williams, Jr.,[4] that became a Top 50 country hit. Kershaw released a French-language album, Two Step Fever, in 1999, and Michael Doucet of Beausoleil is featured on the duet "Fievre De Deux Etapes". Hot Diggity Doug was released in mid-2000 and Still Cajun After All These Years followed in early 2001. His brother Rusty died on October 23, 2001.[16]

Kershaw formerly owned and operated The Bayou House, a restaurant in Lucerne, Colorado, but parted ways with his partners in 2007 due to his displeasure with management and ambiance.[17]