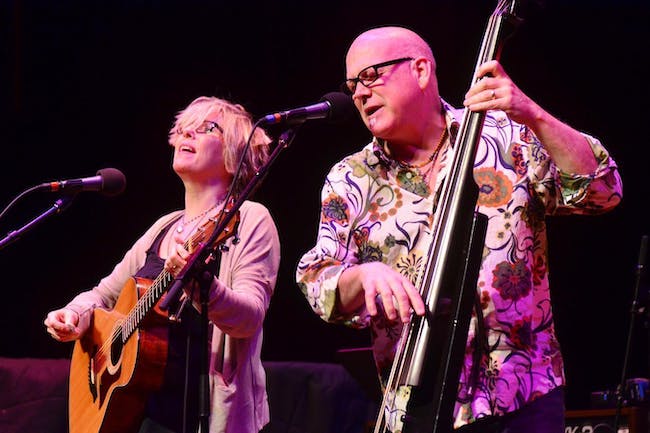 Then he mentions another band as an example of this. Nirvana. Wait, what?

“Oh yeah, I spent time with them,” he says. “As a matter of fact, we had time booked for that record [Nevermind]. They’ve actually been really good about it. They’ve talked about that situation on several occasions. But it was fun. I’d already met Butch [Vig], because he was in a band [Fire Town] that was signed to Atlantic that had wanted me to produce them. I knew Nirvana was going to be huge. Gary Gersh had signed them to Geffen. Their manager was John Silva and Gary had known me. He had been interested in stuff [I had done] over the years. He thought I would like them. They liked R.E.M. and the Smithereens — they liked records I had made.”

The feeling was mutual, as Dixon shares. “I loved these demos that he sent me and I flew out days after I got my first cassette. They still didn’t have words for ‘Smells Like Teen Spirit.’ ‘Lithium’ was done and it was almost exactly like it is on the record. They sent me four or five songs, I loved them and I thought it was great. So I went out and spent some time in Tacoma. It looked like it was going to happen and then I asked for too much money — well, me and my people did.”

As Jones relates, it made things in the Dixon/Jones household a bit tense for a while when it came to that subject. “For the longest time, after they were huge, we were not allowed to say ‘Nirvana,’” she says. “The word Nirvana was not allowed to be said in the house, just because.”

These days, Dixon is at peace with how things worked out. “I was really sad that I didn’t get to make the record, because I liked those songs, but I think Butch probably made a better record than I would have. I wouldn’t have made him doubletrack his voice.”

Just as Nirvana moved forward and wrote their own story, Dixon continued to add chapters to his own. In recent years, with the shifting changes in the music industry, both he and Jones have been able to make new albums at their own pace, releasing them on their label, Dixon Archival Remnants — it’s a name that allows for the pair to release new music, old and new, whenever they want.

For Jones, the idea of a bossa nova album came to mind and earlier this year, she released the appropriately titled You’re Not the Bossa Me, a festive album that’s light and upbeat, a natural side effect of a trip that Jones took to Palm Springs, embracing the opportunity to enjoy warm weather and record at the studio of longtime friend and collaborator Kelley Ryan, who co-produced the new album.

“You know, you could look out the window and just see palm trees instead of laundry! I think it really helped me a lot too, because that’s all we had left to do pretty much, was the vocals. I was really happy that happened.”

Ryan brought additional good vibes to the project and her connection to Jones made things really comfortable.

“She and I have worked together a lot, writing songs together, recording together, etc.,” Dixon says. “It was a really great opportunity for us to [collaborate] and she’s so good at that kind of singing that is perfect for bossa nova, which is very clear and light. She wrote three songs specifically for me. It’s a collection of songs that we could make them into a bossa nova style — sort of a new bossa style, I guess you would call it.”

For their upcoming show at the Music Box Supper Club, Jones says that they will lean heavily on material from the new album, but Dixon also has a new record that he’ll share a bit of material from, the intriguingly titled High & Filthy & Borderline. There’s always an interesting storyline running through his solo work and the new album is no exception, although it took Dixon himself a while to see what was developing.

“I write for a long time to make these records,” he explains. “It’s not like I write lots of songs, it just takes me a long time to figure out and for things to click and come together. This one, the first song that I really wrote for it, ended up on the duet record [the 2012 Dixon/Jones release, Living Stereo], but I didn’t realize that I was writing it about this guy yet. Which is why it ended up on the duet record. It’s a song called ‘Radick Hall,’ which really is supposed to be on [this record]. I realized that I was writing these songs about this guy and then I realized the guy was an assassin. Then he met a girl in this song and kind of talked her into being an assassin. That’s in a song called ‘Torpedo Road’ on the new album, so that’s really where the assassin trilogy of songs comes in. There are a couple of assassins.”

How does Jones feel about all of this? “I start to sweat when he starts telling people what his songs are about,” she says with a laugh.

Dixon still stays quite busy producing other artists. He produced the well-received Smithereens album 2011, nearly 20 years after he and the band had last worked together. He says that working on the album was a great experience and it’s a record that he’s really proud of. Hopefully, he adds, he’ll have a chance to do another record with the group. Until that time comes around, he’ll keep busy. Among his many projects, he works extensively with Cleveland-based singer/songwriter Chris Allen and the pair recently wrapped up work on Allen’s newly-released Everything Changes but the Rodeo. What hasn’t changed is how much Dixon loves to work with Allen, who Jones refers to as an “underrated talent, nationally.”

“You know, he’s just like my little brother now,” Dixon says. “We always got along and I always had a tremendous amount of respect for his work ethic and his understanding that everything sucks and everything’s great at the same time. There’s not a lot of people that agree with me about that. Mitch [Easter] is like that — I’d put him in the same sort of friendship category that I have with Mitch. Chris is just great about not worrying about the wrong things. He worries, but he worries about all of the stuff matters. When we disagree about something, we know how to try to get there somehow. I just like him — I just think he’s a wonderful guy, unbelievably talented.”