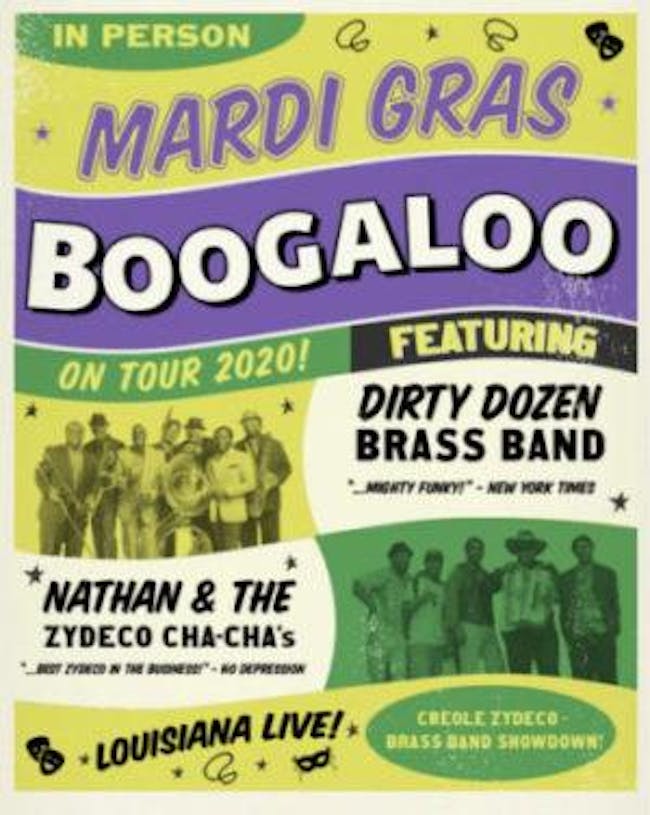 The Dirty Dozen Brass Band are the pioneers of the modern New Orleans brass band movement, recognized worldwide as an unstoppable musical machine.

For more than 40 years, the group has taken the traditional foundation of brass band music and incorporated it into a blend of genres including Bebop Jazz, Funk and R&B and Soul. This unique sound, described by the band as a "musical gumbo," has allowed the Dirty Dozen to tour across five continents and more than 30 countries, record 12 studio albums and collaborate with a range of artists from Modest Mouse to Widespread Panic to Norah Jones.

"The Dirty Dozen Brass Band continues to be a national treasure; steeped in both the past and the present, impossible to categorize and mighty funky." - The New York Times

Nathan Williams provides a direct connection to Zydeco's storied pioneers such as Clifton Chenier and Boozoo Chavis. He formed The Cha-Chas back in 1985, and since then has brought his unique take on this regional South Louisiana music to all corners of the globe. From Lincoln Center in New York to The Grand Ole Opry in Nashville, his music has crossed all barriers to speak to the very heart of the audience.

Nathan and the Zydeco Cha Cha's are keepers of the zydeco flame, committed to keeping their Creole heritage alive.

Together, these bands create a non-stop dance fest. Blues, Cajun, New Orleans soul, zydeco and R&B from two masters of the genres.