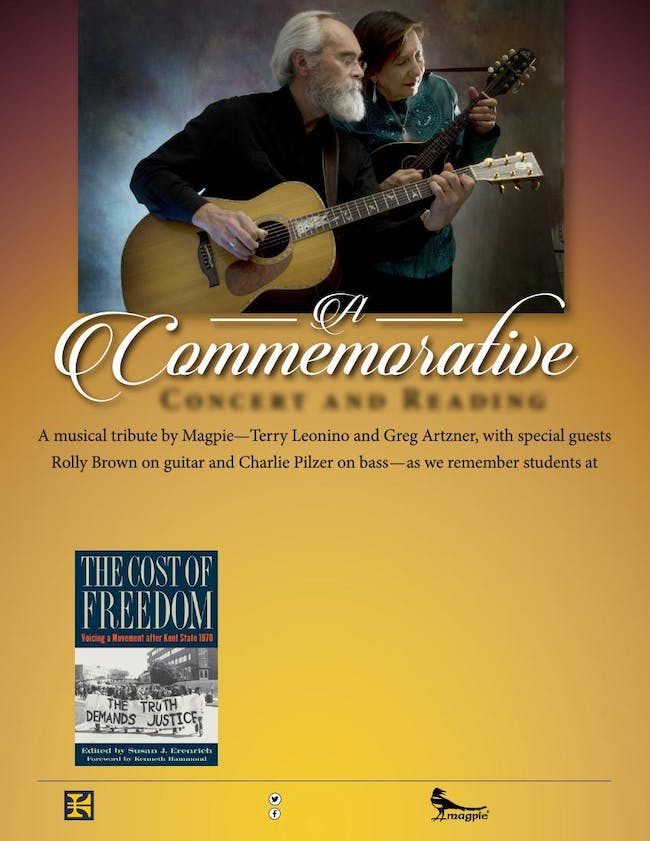 On Monday, May 4, The Kent Stage will present a special event to end the May 4 Commemoration weekend. Magpie - Terry Leonino and Greg Artzner, along with special guests guitarist Rolly Brown, guitar and bassist Charlie Pilzer, will perform an historical musical tribute to all the slain and injured students at Kent State, Jackson State and beyond - setting the events in the cultural context of the movement to end the war in Vietnam. The group will be performing a carefully chosen and emotionally powerful selection of songs of and about the era, interspersed with readings from Susie Erenrich’s book “The Cost of Freedom: Voicing a Movement after Kent State 1970,” newly published by KSU Press.

Leonino and Artzner started out in Kent, Ohio in September of 1973. Artzner and Rolly Brown were witnesses to the Kent State tragedy, and Magpie has played a number of past May 4 commemorations. Brown is originally from Northeast Ohio and has been respected as a brilliant guitarist for more than 50 years. In the 1960s and 1970s, he was often heard as sideman with Cleveland’s Alex Bevan.

Magpie is known for their unique sound and remarkable versatility featuring traditional and vintage Americana to contemporary and stirring original compositions. Award-winning recording artists, singers, songwriters, musical historians, playwrights, actors and social activists, Leonino and Artzner are proud to be, as Pete Seeger said of them, “more links in the chain,” dedicating their lives and music to leaving this world a better place.

Erenrich’s book will be available for purchase at the show. A portion of the proceeds from the sale of “The Cost of Freedom” supports the work of the Kent State University May 4 Visitors Center.